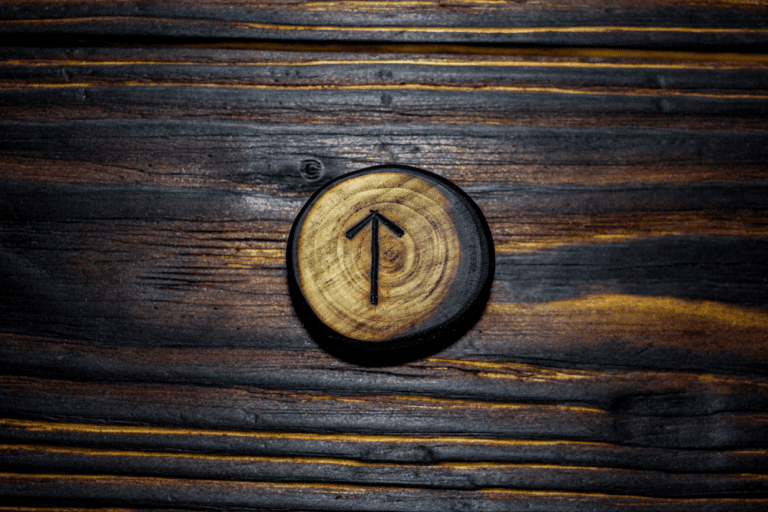 The Tiwaz rune is also referred to as a T-rune and is recognizable as an upright vertical arrow. These runes are shaped in various forms, with different markings, inscriptions, and patterns, but almost all of them will always resemble that upright arrow. One of the Tiwaz runes is known as a multiple Tiwaz rune and resembles a tree-like shape with arrows stacked atop of one another. In literature, a charm ‘alu’ on the Lindholm amulet, a bone piece engraved into the shape of a rib, contains three consecutive t-runes. Tiwaz rune tattoos have long been appreciated by people around the world. They’re famous among veterans, warriors and soldiers, both men and women who admire the Viking era.

In ancient history, the Tiwaz rune is associated with the god “Tyr” who is described as a one-handed warrior whose hand was sacrificed as he was chaining up the ferocious wolf Fenris. Tyr is mentioned in several historic Norwegian and Icelandic poems for his courageous deeds and was famous as the legendary God of heroes, the God of war and self-sacrifice.

What Does the Tiwaz Rune Mean?

The Tiwaz rune tattoo symbol is associated with bravery, honor, and integrity and self-pride. It is also known as a sign of a spiritual warrior, demonstrating leadership, strength and grace. This symbol supports the practice of true law and justice and execution of moral values. Possession of the Tiwaz symbol assures a balance of judgement, fair hearing and correct decisions. The strength and force of Tiwaz are believed to bring righteous solutions and that we should devote our energies in the right place, just as an arrow guides us. Tiwaz also teaches us to have the courage to sacrifice in an effort to enforce the right or good.

Tiwaz Rune in the Nazi Era

In Nazi-Germany era the Tiwaz rune was also well-known as Kampf-Rune meaning battle rune or arrow rune. This symbol was used as a sign of leadership and courage in war and the pattern was followed by various organizations who kept the tradition after World War II. Most noticeably, the Tyr rune was the symbol of various Nazi institutes, including the school of leadership known as Reichsführerschulen and the infantry division called the Waffen SS. Although the Tyr or Tiwaz rune has been a famous symbol for Neo-Nazis, it was not always a racist symbol as its origin and history date back to thousands of years and the heritage has been transferred among many generations.

I am a tattoo fanatic and love all things Celtic. Read through the rest of my blog to see cool Viking and Rune tattoos.