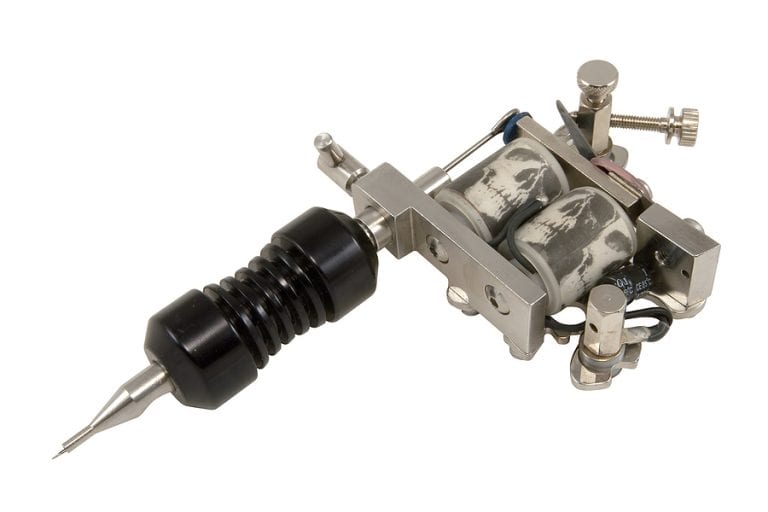 Although tattooing is an art form that goes back long before civilization began on earth, the first tattoo gun or mechanical device was not invented until the late 19th century. Until then, tattooing was a long, slow process performed by hand using needles, cutting instruments, and inks. As with many inventions, the original purpose of the tattoo gun was something considerably different.

In 1876, Thomas Edison, who would invent the light bulb, patented a device called the Electric Pen. This device was used for the duplication of documents by businesses. It consisted of a motor capable of high speeds which was also reciprocating to drive a single needle.

The needle itself did not produce ink. Rather, the device perforated holes into a master form to create a stencil. Then, ink was rolled over the surface and passed through the holes which create copies relatively quickly. It was seeing the Electric Pen that gave Samuel O’Reilly the idea of creating a tattoo machine based on how it functions.

O’Reilly modified the invention by adding a reservoir of ink and additional needles. His changes allowed him to earn a patent for his device in 1891. The result was that tattooing started to become more popular as his device was more precise and caused less pain compared to manually tattoo methods. Interest in tattooing grew at the turn of the 20th century for both men and women.

The device itself was rather large but remained relatively unchanged over the next 30 years when Percy Waters created a new design. The design by Waters is still used today, although with some modifications. It consisted of two electromagnetic coils that were put side-by-side inside a frame. The device also included a spark shield and could be turned on and off by flicking the switch.

Waters was not only an inventor he ran a successful tattooing supply company that provided many of his devices around the world. As a successful tattoo artist, Waters managed to expand his trade and revolutionize the tattoo industry.

Arguably the biggest change in the tattoo gun was the change in materials from the old iron, steel, and brass to aluminum. This change alone took off considerable weight to the device and made it easier to use.

Today, the most popular tattoo machines are the Stingray and Dragonfly which have added adjustable depth, speed, and force to their array of selections. Another advance was made in 2009 with the advent of the Bishop Rotary machine which was reduced the weight even more compared to the switch to aluminum. This allowed for tattoo artists to perform longer sessions with less strain on the wrist.

The modern tattoo gun still owes a large debt to the initial design of Thomas Edison, even though his Electric Pen was designed for copying, not tattooing. With the advent of the modern tattoo gun by Percy Waters, this art form managed to become a worldwide phenomenon that is still quite popular today.