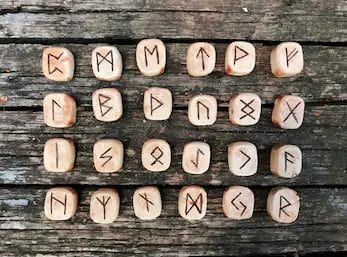 Runes are symbols (pictograms, or little pictures if you like) that were used by the ancients for magic and later for writing. Their origin is shrouded in mystery, but they seem to have come from Etruria, a kingdom in the land we now call Italy and worked their way up through Germany to Scandinavia, where they had their heyday during the first millennium (0-1000AD). At first, the runes were just used for divining and magic, but the people of Northern Europe started to use them for writing messages as well. Each rune represents something in its magical sense, and also represents a sound in its writing sense.

The sounds usually match up with the magical meaning, too. For example, the rune Dagaz represents “Day” in rune magic, and it also represents the sound “D” when it used for writing.

What is the Futhark?

Futhark is the name for the rune row or full rune set. It does the same job as our alphabet. Due to changes in pronunciation over the centuries, the Anglo-Saxons came to call it the Futhorc, but it’s basically the same word.

How did this name come about? Same way as the name alphabet came about, I guess. The word alphabet is made up of the first two letters in the Greek alphabet, Alpha and Beta. Those were the Greek names for A and B. I guess everybody knows that.

So naming the rune set follows the same principle. We take the first six runes Fehu, Uruz, Thurisaz, Ansuz, Raido, and Kauno – put the sounds they represent together, and they make the word Futhark. (The Th sound is represented by just one rune, Thurisaz.).

Why are these the first six runes? I don’t know. Nobody knows. You might just as well ask why did the Greeks decide to have Alpha and Beta as their first two letters instead of Omega and Delta? I don’t suppose anyone knows the answer to that, either. The fact remains that the ancients most frequently wrote the rune set in the order I have put them in, with Fehu, Uruz, Thurisaz, Ansuz, Raido and Kauno as the first six.

There are several versions of the Futhark or Futhorc used by different cultures of Northern Europe and there are also variations throughout the ages. The commonest and most widely-used rune set is known as the Viking, or Norse, or Elder Futhark and it contains 24 runes:

Below is the early Anglo-Saxon Futhark (also known as the Anglo-Friesian Futhorc) which was brought to Britain by early pre-Viking European migrants.

My wooden rune casting sets used to include a blank piece because some folks like to use it to represent Destiny or Fate. I don’t use it myself. This idea is quite modern and was advocated by Ralph Blum with his rather inaccurate work “The Book of Runes”. Contrary to common belief, he was not the originator of the blank rune which is referenced in research materials in my possession as early as the 17th Century. But most serious rune users do not bother with a blank It’s not a rune so it has no significance in a divining sense, they just keep the blank piece as a spare.

Over the centuries Scandinavian users reduced the Norse Futhark to just 16 runes – presumably to simplify the task of writing – so that some of the runes had to do double-duty for two or three sounds. This later adaptation (7th-8th Century) became known as the Younger Futhark.

The runes brought to Britain by Angles, Saxons, and Jutes migrating from Scandinavia and Holland were called the Anglo-Friesian runes. As their use spread through Saxon England they became known as the Anglo-Saxon runes. This Futhorc also developed over time, but in the opposite direction; it expanded to a total of 33 (possibly as many as 38 in Northumbria) runes before they fell into disuse.

There are other Futharks of more modern origin such as the Armenan runes developed by Guido von List in the 20th Century, and a system of Elvish runes invented by J R R Tolkien for use in his books “The Hobbit” and “The Lord of the Rings” trilogy. The Ancient Runes are mentioned in some Harry Potter novels, but to date, author JK Rowling has not invented a rune set. Being a great fan of her books (yeah, I know they are for kids, but I’m just a big kid really), I believe she is too intelligent and responsible to mess with history.

There are some websites out there on the www that talk about Witch runes, Celtic runes, and Druid runes, but these are quite erroneous inventions of modern origin. There are no such things as Witch, Celtic or Druid runes.

Irish Celts did have a strange written form called Ogham (pronounced Oh-ehm) script used for a small number of inscriptions, but Ogham is not related to the runic form nor does it bear any more than a superficial resemblance.

The fact is that Celts and Druids – the indigenous population of Britain – had no contact with Norse culture or anything to do with runes for several hundred years. When migrants from Northern Europe started to settle the North and East of Britain from around 500AD they brought their culture and runes with them. By that time the great majority of Celtic tribes had already started to adopt Christianity, so the pagan faith of the invader was assimilated only minimally, if at all.

In fact, the two cultures were constantly at war. The Celts were inexorably driven back and reduced in number by the ferocity of the invaders, their superior military know-how and their weapons. But during the ensuing centuries, the Christian faith of the Celts gradually overcame the Pagan beliefs of the Norsemen, so that only remnants of either culture have survived.

If you are looking for Witch, Celtic or Druid runes – forget it. They are modern inventions and have no historical basis in fact. Anyone who tells you different is talking through a certain orifice – you get the picture.